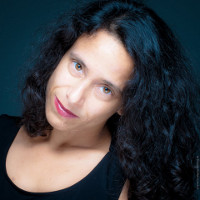 Degree as a rhythmist at Staatliche Hochschule für Musik Trossingen in 2003. Afterwards, she was educated as a dancer at TIP Freiburg (School for Dance, Improvisation and Performance) and as Integrative Vocal Coach through Romeo Alavi Kia (Berlin/Wien).

Since 2008 she conceives and choreographs her own pieces, which have been staged all throughout Germany at various theaters and on festivals. In 2009 she founded the company urbanReflects. So far, many full-length plays and a number of short dance plays have been developed under her direction, for example "unrestricted exploitation" (2010), which was nominated for the Stuttgart Theater Prize in 2010 and "Auf dass wir werden, was wir sind", which premiered in August 2013 in Mannheim. The production was developed among other places within the frame of the PAiR scholarship of the international residence program of Schloss Bröllin e.V. In 2016, the company urbanReflects went on a long tour of Baden-Württemberg with four different variants (stage indoor, stage outdoor, site specific, en passant) and used the performances to observe how people receive dance. She is currently writing a book documentary about it together with Linnet Oster.

In 2016/2017, she developed STAFET as a performer in the company X-act of Kitt Johnson (Copenhagen).

2015/2016, she has been charged together with Volker Hartmann-Langenfelder as artistic director and in evaluating the project HAUSBESUCH, which has brought performing art of the free scene to three rural communities of Baden-Württemberg for one year.

From November 2014 to May 2015, she received the scholarship "factor art" of the foundation "Montag Stiftung Kunst und Gesellschaft", where she realized a variety of participatory site-specific work in Dortmund in the project "Public Residence: die Chance".

In April 2013 she received a scholarship from the Stuttgart Theater Prize, where she was in artistic dialogue with Christian Holzhauer and Rimini-Protokoll.

In the spring of 2013 she was ceded for use the former riding hall in the Mannheim Turley barracks with her concept "Testlabor Turley und der Turley Thursday" by the city of Mannheim and the MWSP project development. She converted the empty hall into a glassy test and performance venue for 5 months and opened the place for artists' colleagues as a meeting point for exchange and ideas for unusual formats. In this context, she experimented with various artists and worked on various new productions.

Among other things, she founded her collective Kollektiv wirhabendasnichtgewolltProduktion. The collective oscillates between the dance studio and the city, between thought and movement improvisation, between virtual and real world.

She worked with her company and various cooperation partners about "Chance Tanz" with immigrant girls in Freiburg and with teenagers in Landau/Palatinate. In July 2011, the piece "Und welchem Gral jagst Du hinterher?" was performed in E-Werk Freiburg, following the piece "Parcival XX-XI", which she developed in cooperation with the TZI of the University of Bremen. In 2012, she developed the piece further to "Operation: Parcival" with premiere at the open Ohr Festival‘ in Mainz.

Teaching activities since many years in dance, singing, choir and rhythm with laymen and in the field of education. In 2016 she founded the label "xo:body art.context.communication", which is offering a workshop intensive in 2017.

Her focus is on the interdisciplinary work with artists from a wide range of disciplines. Artistic collaboration with visual artists, poets, actors, photographers, musicians, media artists and cooks. She is currently working on the question of the reception of performative art, especially the reception of the unspoken in dance, as well as the question of whether and how the reception can be influenced. She is very fresh, exploring how to encourage audiences to self-determined reception, including by co-creating them in her projects.