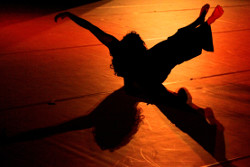 a participative performance-experiment for a self-determined audience

Can an audience influence the output of the dancer in advance? To what extent can the dancing body become a mirror for them? Performer Dorothea wonders whether a dancing body can be a projection surface in order to sort your own thoughts in a kind of "meditation" and to reflect on socially present events and leave the performance with more awareness and clarity or ideas.

The term "meditation" does not necessarily refer to the energetic aspect. Rather, it refers to the component that you are invited to resonate with a dancing body for 45 minutes to perceive emerging images, thoughts, and sensations. Dorothea hopes to create a space, in which the reciprocal exchange of a performing event and audiences' experience (before, after and at the moment) can bring about something with the fellow witnesses.

Synchronicity as the interrelationship of events that were not linked together in a planned manner, but in the simultaneity of the stage happening in the process of watching, but now automatically linked and freely associative, and finally interpreted, plays an important role.

She understands her solo performance as a dialogue. She wants to encourage you to express your inner reverberation of the performance. Therefore you are invited to bring diverse material and things of your choice to express yourself, such as colors, paper, posters, pens, various materials for collages, wood, screens and instruments. Or even your own body, your own voice and your own thoughts. An open space invites to action or just to sit comfortably, linger, talk to each other.

The personal experience of the performance can be divided in a variety of ways with regard to the available communication options. All in all, there is a space that offers freedom in different layers to perceive and express. A space to communicate, discovering the unknown or even receive the output.

Within the scope of her very own revolutionary research "Schreibst Du noch oder tanzt Du schon? - getanzter Widerstand" ("Are you still writing or already dancing? – danced resistance") the choreographer and performer Dorothea Eitel tries to liberate herself from the so-called expert juries and the promoted, currently declared as innovative esthetic of the art respectively. Thereby she wants to set the example that art must BE ABLE TO BE FREE.

In times of digital petitions, pros and cons per mouse click merely in the form of bits and bites, she wants to provide an impetus to bring resistance back into the real space. She holds the view that shortcomings and opinions should be visualized and discussed again in the haptic space.

The idea was born because she did not anymore feel like sitting in front of her computer writing intellectually conceived proposals. "I want to create at last!" was her defiant response as she pushed the computer exhausted and demotivated into the corner.

But what can you do without grants for the fees for dancers, rehearsal room costs, and equipment? She decided to use what she had. And that actually is not that little.

So in her solo performances alongside dance, she also has her speaking and singing voice, self-written texts or perhaps secret stories up her sleeve. And that in addition to materials like videos, music, sound collages or installations kindly provided by colleagues that she brings along randomly chosen.

ABOUT THE LIVING PETITION

Participation in this project sees the artist as actively signing her petition. Those who advocate this petition, are giving artists their trust and acting for the freedom of art. Additionally one shows more use for a concern, compared to digital petitions in which you just read the headline and click the support or reject button.

This petition can only be actively advocated. A vote in the truest sense of the word, by yielding for example, a rendition of services, goods, ideas, time, initiative, food, a sleeping place, etc.

In the age of digital petitions incurred by a mouse click for agreements and contradictions to the cause in the form of just moving bits and bytes, voting gets a whole new dimension and a different meaning. Dorothea Eitel wants to provide an impetus to bring the resistance back into real space. She believes that grievances and opinions in haptic space should be visible and discussed. At the same time she sees a pendent to the current relationship between politics and the margins of society.

Through this action people should be encouraged to be attentive towards drawbacks, to stand up for their concerns and needs and to risk expressing claims for the meaning of the public. Even as a fringe group without advocates and allies. Namely, with the resources that are available to them. The creation of the public and asking them to help them be themselves are the first step towards self-empowerment and important in a democratically governed society.

Furthermore, it is important to make it clear that in a democracy the rulers should not be the only ones who demand and decide and that encouragement should not be decided by the elite. Rather, mutual support, the application of understanding, finding win-win situations and also the courage to ask for help where it is not possible without the support of an emphatic community is important to make a difference, to achieve, or implement.

Subversively dance can be made into an example, to exemplify politically neglected groups a possible way on how to be taken seriously if not in a position of power, through simple resources which can be found in the power of standing together and hearing and accepting each other. The unusual experimental arrangement would examine whether mutual support can generate a mass to counteract a taken oppressive decision and in spite of everything develop it into a stage production.

What potential does a cohesive, mutually supportive mass have and how can you win them over? In a time when TTIP apparently does not even want to be prevented by mass protests, it is even more important to work on a society that recognizes their pros and conflict potential, demands and uses.