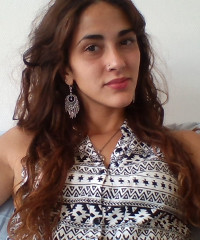 She works as a dancer and she worked as a teacher (contact improvisation) in South America and Spain. She worked with companies like United-C, Crucible or Company NDC Amsterdam.

She did many own creations, the latest ones being a duet called "Al final del tunel, siempre hay luz" (At the end of the tunnel, there is always a light) for a festival in Italy with a collaboration of the musician Martin Comploi, and "The space of the metamorphosis", a solo with the support of the cineaste Joaquin Balladares.

She likes as well to collaborate with visual artist or with others fields like in her last collaboration, where she collaborated with a scientist in a project called BRAID presented at the Rijksmuseum Amsterdam. At the moment she is creating a performance in Flamenco-Contemporary dance with two others dancer, musicians, singers and visual artists in Spain.

She is part of c/unic, an active collective together with six other dancers. She works for her first time with the company urbanReflects in the project Auf dass wir werden, was wir sind in 2016.

She is on the development of her possibilities, both physical and theatrical. On the research of the endless learning process. Always be better, more precise.

Discovering a way to communicate with NO limits, no words needed. Towards an audience and towards her own colleges. Movement is the essence of all communication.

She looks for the real movements coming from the real feelings, from the inside to the outside. Trying to avoid forms with no sense behind them.