Witwenduett (duet of the widows) 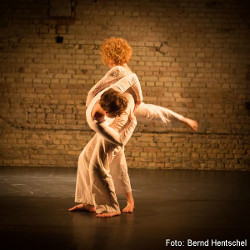 In the first act the play Operation:Parcival deals with social utopias in the 20th century and reveals them one by one as false Grails. This act mainly contents showing the dancers submit to systems, where they simply function and are shown as faceless, replaceable creatures. Nobody cares for their feelings or their personal opinion.

The duet of the widows is in many ways an exception. It does not contain multimedia elements as the rest of the play, and completely goes without involving the scenery - consisting of 12 large polystyrene cubes. The duet of the widows stands between a war scene in a dictatorial regime and communism as a new social utopia and therefore marks an important moment when the human being is presented as an individual and a sensitive entity.

In the staged situation the widows show their grief over their dead husbands and sons, which brings them very close to themselves, to their emotions, dreams and aspirations. At the same time they are still not allowed to give in to those feelings completely, since they still have to function and additionally undertake the men's tasks.

The challenges presented to women after the war were enormous: They had to play both parts, the male and the female, at the same time. This is exactly what the choreography means to show. The first part of the duet has been designed by two men and now the dancers are women. The play therefore creates an uncommon image of women that ranges from sensuality to powerful acrobatics. The duet, that takes up six and a half minutes of the production Operation:Parcival, has now been developed further for a performance at TanzDelta Mannheim.

During the choreography the two women find more and more softness, femininity and a powerful flow. They are convincing because of their physical and mental power and end with a joyful curiosity to something new and unknown, which - having now regained their full feminine strength - is yet to come.